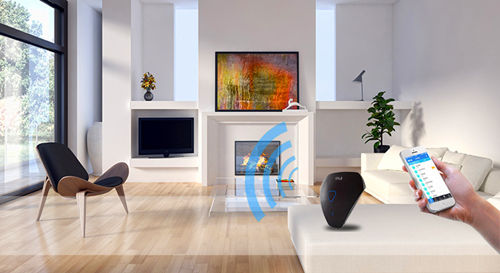 In the near future, people will be living just as the Jetsons did, but with one major change. All chores will be done without having a robot maid. Smart home technology will allow all sorts of electronics and appliances to be able to communicate with each other and perform a variety of tasks. Whenever someone wants to have a snack, but does not feel like making something, why not have the refrigerator suggest something based on what it has inside of it. Not only that, it would communicate with the microwave to prepare the cooking power and time for that particular dish. Smart home technology can and will be used in many electronics and appliances in the near future, and is a form of technology that will prove to make life easier in ways, and more entertaining.

Many of today’s products are becoming “smart.” Kitchen refrigerators, microwaves, and stoves are utilizing this technology. Even washers and dryers have the technology today to be more automated to fit people’s needs. Products in the bathroom will even start to use smart home technology. Electric razors, toilets, and showers will have some sort of automation built in. Smart home technology is still in its early stages but will soon make a tremendous impact on everyone’s lives.

Smart home technology may be innovative, but it just uses existing technology. A smart device is an ordinary appliance with a sophisticated computer installed to give it more functionality. But it is what these new functions bring that makes it so significant. Smart homes will become more of a reality as broadband internet becomes more widespread in homes. Cable broadband is not the only technology that will be used to have devices in the home communicate with each other. Other technologies such as DSL, Bluetooth, and wireless will also be used (Barthold). These technologies provide a way to have a home networked for devices to communicate with each other and to have them connected to the Internet. These different communication technologies, whether they are hard wired or wireless, provide the foundation on which a smart home will operate.

The ability for devices to communicate with each other will provide new functionality to just about every device in a home. The ability to connect to the Internet also brings more functionality. Devices will be able to request service when needed to nearby certified repairers. Since these devices will be using currently implemented technology, companies can very easily make smart home technologies.

The most heard about smart technologies are that of the kitchen. Nearly all appliances in the future will be “smart.” Devices such as refrigerators, microwaves, coffee makers, and dishwashers will have the technology. LG Electronics has developed the Internet Refrigerator. LG is a leader in innovative technology, both computer and electronic. The Internet Refrigerator utilizes the technology to help make many tasks much easier. The refrigerator is Internet enabled and allows for users to communicate with it via the Internet, cell phone, PDA. The refrigerator is able to download recipes and then display them on its LCD screen. The refrigerator also takes an automatic inventory of items inside of it, alerting the consumer to what is there, how long it has been there, and when an item is running low. Because many people use the refrigerator to leave notes to themselves and others, the Internet refrigerator has the capability to store appointments and occasions to help organize one’s life. LG Electronics is not the only company making such a product (LG Electronics). Other companies such as Samsung, General Electric, and Whirlpool all have similar refrigerators available. Some models have the ability to track inventory and even order new groceries when they are needed (Barthold).

The next generation microwaves are also smart. Microwaves can communicate with smart refrigerators and suggest recipes based on what items are in the refrigerator. The microwave can even be set to start at certain times while away from home, so when one arrives home, a hot meal is waiting for him or her. In addition to the microwave, ovens and stoves will operate in the same way. They will suggest recipes based on the food items available in the home. Cooking will become more precise with no room for human error as the device automatically sets itself to the right temperature and time. Coffee makers already have smart technology. Consumers can currently set a schedule for the coffee maker to start brewing. In the future, coffee makers will even be able to learn how each individual likes his or her coffee, use the correct amount of coffee and water, and brew to each individual’s exact liking.
Stepping away from the kitchen, the living room is another part of the home that can greatly benefit from smart home technologies. Devices like televisions and stereos will utilize this technology to further ease and improve the entertainment experience.

As higher resolution televisions become more popular in people’s homes, more interactive content will become available. Instead of consumers having a television and a desktop PC, soon all PC functions will move over to the television. PC-like Internet capability will become possible on a home television set. The ability to buy products on the television with just a push of the button on the remote control is a big opportunity for businesses to take advantage of smart home technology. The ability of companies to give the user the option to buy a particular product immediately after viewing the commercial is a way to increase sales tremendously. This leads to interactive TV, which is becoming more popular with major cable and satellite companies. The ability to shop, gamble, and interact with the television becomes available because of smart home technologies. Watching television is no longer going to be as limited as it is today. The ability to watch sports at any angle the consumer wants is something that will be seen in the future. Another possibility of interactive television is the ability to actually play with contestants on a game show. There are many different ways that interactive television will change the way people watch TV, allowing people to become part of the world that they see on TV.

Other products that are coming in the near future are smart showerheads and toilets. Showers will be able to store individual profiles for each user and will adjust water temperature and pressure settings based on that individuals’ preference. No longer will people have to fidget with the temperature setting trying to get it right for a comfortable shower. Toilets will have self-clean capabilities and will be able to adjust flush settings depending on the amount of matter in them. Toilets may even be able to notify users when the toilet paper stock is low and order some more for them. An important feature that is available on virtually all smart home technology products is a self-diagnostic system. All these devices will be able to notify consumers when there is a malfunction or when some type of service is needed. Many of these devices will also be able to put in a work order automatically. Servicemen will be able to then come and repair the device without a hassle to the consumer. Devices that take all the guesswork out of using them and keep themselves up and running properly is truly innovating. No more overcooking the chicken, no more dirty dishes when they have already been washed, and no more wet clothes out of the dryer. Life with smart devices is going to change the way a home operates.

With Smart Homes people’s lives will become more efficient as more household tasks become automated. Imagine not having to write a grocery list ever again since all the groceries will be ordered automatically. All that would need to happen is for someone to pick up the groceries. Food will be ready to eat when people get home. The extra time saved would mean more time to for entertainment, oneself, or loved ones. Consumers will soon realize that smart home technology will be something that one cannot live without. The personal computer in its early stages took many years before people really started using it and today, it becomes very difficult to find any person without one. Smart home technology is not unlike the PC, and soon will be something that everyone has.