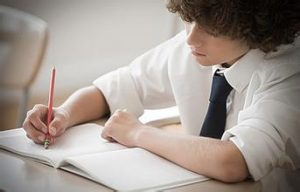 在示范段落 1-1，主题句是： We all know that cigarette smoking is a dangerous habit because it causes health problems.

结论句是： It is clearly identified as one of the chief causes of death in our society.

在上述示范段落中，隐含的问题是“What are the health problems caused by cigarette smoking？”结论句作出的回答是 It is identified as one of the chief cause of death in our society.

Our neighborhood has been greatly changed. When I last visited there， about half the homes had been torn down to make way for a superhighway. The remaining buildings were plastered with billboards and surrounded by traffic signs and litter. Now the whole neighborhood has become dirty， noisy and full of cars.

主题句： Our neighborhood has been changed.

主题句隐含的问题：“How has the neighborhood changed？ 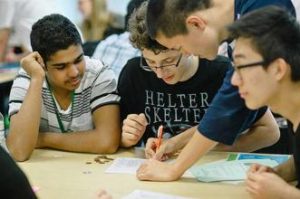 Directions：Read the following paragraph.Find out the topic sentence and the concluding sentence， and rearrange the details so that the paragraph will make sense.

① In less than three years the farm had gone to pieces.②All the windows had been broken out of the big two-story farm house.③In the front of the house the grass was about three feet tall andthe barn yard was full of weeds instead of pigs squealing to be fed.④There were no more cows to milk or horses to ride.⑤My grandmother’s farm has a lot of enjoyable memories for me，but after she died， I left home to join the army and when I returned，I was disappointed at the changes that had taken place.⑥ Paint was peeling off the house and the porch roof was sagging.⑦ Lively as the place had been before my grandmother died， it seemed to have died with her now.⑧This farm had once been lively with the noise of a tractor plowing the land and a dog barking whenever someone came up to the house.

Directions： Read the following paragraphs and underline the topic sentence of each. Then write your own concluding sentence to complete each paragraph.

Pollution has caused three major problems in the last decades.First， with the development of industry， more and more factories have been built and have sent out smoke and poisonous gases.Thus the air is polluted. The increasing number of cars adds to the air pollution. Second， farmers use chemical fertilizers to increase production and insecticide to kill insects. When rain flows with these poisonous chemicals to rivers， water is polluted. A third formof pollution， noise， is becoming more and more serious. Very loud noises can make people sick， and even drive them mad.

There are three important findings from studies concerned with notetaking. First，notetaking does not interfere with listening and comprehension； in fact， it helps you listen. Second， students who study their lecture notes remember one and a half times more after six weeks than students who do not review. Third， students who take no notes， or do not study their notes， forget approximately 80percent of the lecture by the end of two weeks.From these findings we can conclude that students who take enough notes and then study them， both directly after the lecture and several additional times before an examination， stand a good chance of remembering between90 and 100％ of the material！