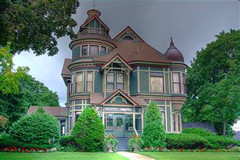 First, a little background on Queen Anne. Anne was born February 6, 1665 to the parents of James, Duke of York and Lady Anne Hyde. She was born in the St. James Palace of London. Anne’s father later reigned as James II, but was later dethroned by Anne’s sister and brother-in-law Mary and William. Both Mary and William ruled together until their deaths and because they were childless, Anne succeeded them to the throne.

Anne’s legacy was one of increase of influence of ministers and decrease of authority of the Crown. The reign of Anne was also one of artistic and literary advancement. Some characteristics of later Queen Anne style was evident in some of the architecture during her time. A famous architect from that time was Sir John Vanbrugh who designed elegant edifices such as Blenheim Palace, home of the Marlboroughs. He also designed Castle Howard. Part of the elaborate nature of these designs are common in Queen Anne architecture today.

Queen Anne died August 1, 1714 and was buried in Westminster Abbey.

Queen Anne architecture can be defined as elaborate and flamboyant. This architecture is lavish with steeply pitched and irregularly shape roofs. Queen Anne style is asymmetrical. Ironically, this style more closely resembles that of the Victorian agethe age of Queen Victoriarather then the architectural style during the period of Queen Anne.

Even more ironic is the fact that Queen Anne architecture got its roots and thrived during the machine age. It is ironic in the fact that a style so lavish could exist in an era where factories were becoming a large part of America. Heading into the late 1800’s America had been mostly an agricultural country. Our nation was mostly made up of farms and plantations. This began to change in the late 1800’s.

The late 1800’s saw the beginning of the industrial revolution. Railroads were sweeping across our country and it took steel to make it run. The steel industry became very much in demand. Steel mills were springing up everywhere and immigrants were pouring into our country to work in them. Recently freed slaves were also flocking to the steel factories as well. This gave investors a cheap source of labor and for the first time in our country we had a new generation of millionaires.

Spindled: This style is what usually comes to mind when we think of Queen Anne architecture. Also called “gingerbread” houses, they are characterized by delicately turned porch post and ornamental spindles. This style is also known as Eastlake because it resembles the style of a famous English designer, Charles Eastlake.

Free Classic: Free classic style is different from spindled style. Instead of the ornamental spindles, this style has large columns that usually sit upon brick or stone piers. Free Classic Queen Anne also might have Palladian windows and dentil molding. Palladian windows are three-part windows were the center part is large and it has two smaller windows on each side. Dentil molding a series of a series of closely spaced, rectangular blocks that form a molding.

Half Timbered: Half timbered Queen Anne architecture resembles the Tudor style homes we see today. They are characterized by an exposed wood framing. The space between the framing is filled with plaster, brick, or stone. A highly decorative style of half timbered homes are called stick style. This style had it’s problems with the harsh North American winters. The plaster and fill in between the wood framing was very drafty, causing many builders to cover the Half Timbered homes with wood or plaster.

Patterned Masonry: This style is frequently found in the city. These types of Queen Anne’s has brick, stone, or terra-cotta walls.

Shingle Style: Shingle style was made popular by the New England school of architecture. It combined the ornamental patterns of the Eastlake style and the Colonial American architecture that become popular during the Centennial in 1876. Shingles were used on the surface of the house giving a weathered look.

Queen Anne style was not just for the wealthy in our country. This architectural style was also used in the homes of the middle class. Today, much of our architecture borrows from the Queen Anne style. Patterned shingles, spindlework, extensive porches and bay windows can be found in homes throughout most communities.

In conclusion, Queen Anne is a style of architecture that was born out of the Industrial Revolution in the late 1800’s in America. It’s style is not easily defined or placed into a category. This style evolved over the years and is present in much of the architecture that we see today in America. Once a style used mainly be the wealthy, it can be seen in most neighborhoods in our country.