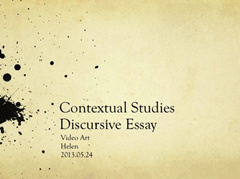 Now discussing discursive essay, the type of essay is a sort of argumentative essay whereby the writer presents both sides of the argument clearly indicating the reason why he supports one side over the other. In other words the discursive essay discusses both possible aspects of a topic while favoring one over the other gives the true reasoning why he thinks it so, supported by sound and strong facts and figures. The essay requires all the fundamentals that are necessary for a worth reading essay i.e. logical structuring of an argument, its anticipation and opposing arguments.

A good discursive essay requires a careful distribution of the data into appropriate paragraphs where the first paragraph introduces a controversial topic thus explaining the writer’s verdict about it. The second paragraph is provided with strong and logical reasoning and background facts. Best part would be the statistics, expert opinions and real world examples. This is the most important part as it strengthens the writer’s point of view and helps convincing the reader’s mind to agree to the writer’s.

The following paragraphs are provided with the supporting data with each paragraph discussing a single argument. But one thing to remember is that while rejecting any idea or opposing argument the writer needs to be very much particular about the evidences he would be providing in support of his verdict or against his opponent’s. The reasons that one can provide can be ethical, moral, logical or practical. This however, does not necessarily mean a complete denial of the opponent’s facts and views. A good discursive essay does include a confession statement that although the writer agrees with the opponent’s views to some extent yet what believes is that his views are right and well supported.

So writing a discursive essay is not that simple as it might appear to be. The success of an essay depends upon the extent to which it succeeds to draw its viewer’s views towards what the writer wants to convey to be better.

1.Introduce a controversial topic in the first paragraph and explain the topic and how you feel about it.

2.Explain your strongest argument in the second paragraph. This should be the most compelling piece of evidence that you can support logically to aid your position. Strengthen it with expert opinions, statistics and real-world examples, but avoid anecdotal claims, especially when writing college essays.

3.Write supporting paragraphs in descending order of importance. Each paragraph should illustrate a single argument.

Explain why you reject the opponent’s arguments. Your reasons might be moral, practical or logical. You may start with a concession statement, admitting that some of the opposing arguments are valid, but state that you still think your side is right.

6.Write a conclusion for your discursive essay that acknowledges your opponents’ principal argument, and explain why you don’t subscribe to it. For example, if you were writing a paper against the death penalty, you might say, “I acknowledge that murderers deserve the most severe punishment society has, but I believe the death penalty should not be used because it can lead to the execution of innocent people.”